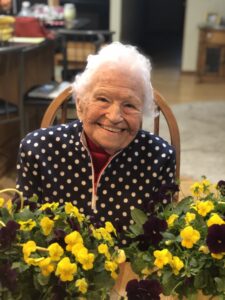 Adele was the loving wife of the late Hebert Miesfeldt, and dear sister of the late Dolores Kay. She is survived by her sons, Scott (Karen) Miesfeldt, Mark (Jeannie) Miesfeldt; and daughter, Susan (Charles) Schulte. She was a loving grandmother of Melissa Kron, Anna Radke, Christin Kammer, Carson Miesfeldt, Adam Schulte, and Lauren Schulte, and Great grandmother to Benjamin, Adele, Norah, Eliza, Penny, James, and Charlotte.

Adele graduated from the University of Illinois and the Chicago College of Laboratory Technique. She was a devoted Chicago Bears fan and season ticket holder of 61 years. She was a member of both the American Needle Point Guild, the Embroiders Guild of America and was part of many local independent stitching groups where she made many long-lasting friendships with those who shared her love of needle and thread.

In lieu of flowers, donations may be made to The Salvation Army or The Wounded Warrior Project.