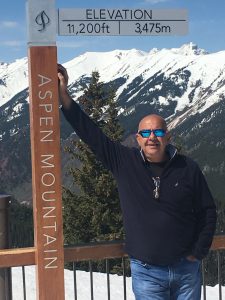 The Visitation for Alexander George Jordanov, 62, of Palatine, will be held Saturday, April 30, 2022 from 2:00 p.m. until the time of the Funeral Service at 6:00 p.m. at the Ahlgrim Family Funeral Home, 201 N. Northwest Highway, Palatine.  The Interment will be private.

Alex George Jordanov was born on January 9, 1960 in Sofia, Bulgaria. The son of George and Sabka, Alex had a wonderful childhood – the one the kids in the 60s had – playing outside until dark and occasionally getting into trouble.

One summer day, he found a swimming pool, jumped a fence, and found his lifelong passion of swimming. Alex started swimming at an early age and was recruited for a prestigious sports school at age 10. He trained daily throughout middle and high school, swimming the butterfly for miles and miles a day. Alex eventually made the Bulgarian National Swim Team and represented the country in multiple events all over Europe. He walked away from his swimming career shortly before the Moscow Olympic Games and enlisted in the Bulgarian Army. Alex spent two years in the Bulgarian Army before going back to real life where he continued school and worked jobs that kept him outdoors. He was always happiest outdoors, especially near the water. Alex often reminisced and told stories of the winters he worked as a ski instructor, and the summers he lived by the Black Sea and worked as a wind surfing and sail boat instructor.

Alex met his wife Gina in 1985. Shortly after, they got married and started their life together. Their first daughter, Sylvia, was born in Bulgaria in 1986. The Jordanov family was settling well in Sofia when Alex was given the opportunity to come to the United States in 1990. He moved to Chicago and started his career at Siemens, where he worked for over 30 years. In 1993, Gina and Alex welcomed their second daughter, Chrissy, and their plans of staying in the States for a few years turned into 30 plus.

Alex’s main passion in life was spending time with those he loved. He spent weekends gardening, going on bike rides with his wife, hunting with his friends, and gathering around the dinner table with his family and friends to share stories and laughter. Alex was an avid traveler, and always looked for trips closer to the ocean. His dream was to retire in the near future and move to Florida.

Alex is fondly remembered for his infectious laugh, kind smile, and generous spirit. He was always the life of the party, and it was certain that he would be the first one on the dance floor once the music started. His dance moves will live on in infamy and no one will forget his willingness to help those in need around him.

Alex passed away on April 25, 2022. Alex is survived by his wife, Gina; his daughters, Sylvia (Dave) and Chrissy (Steve); his granddaughter, Cora; his mother, Sabka; his sister, Daniela; his nephew and niece, Petur and Viviana; and many friends not just throughout the United States, but the whole world.

The family encourages those who wish to express sympathy to consider a donation to The Fish & Wildlife Foundation of Florida in order to support Alex’s passion for the outdoors and marine life.