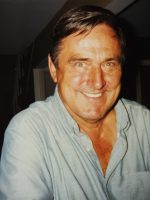 A Memorial and Celebration of Life with family and friends will be held at a later date for Alfred “Al” Paul Donath of Des Plaines, IL.

He was the son of Edwin and Katherine (nee Mueller) Donath.

Al’s life started with a commotion, as he was one of three babies saved from a fire at Evangelical Deaconess Hospital. Al spent the beginning of his childhood being raised by his aunt and brothers, as both of his parents passed by the time he was nine. Al graduated from Carl Schurz High School in 1954 where he was the quarterback of the varsity football team, vice president of the chess team, and played in the marching band. Al would also brag that it was the first year that Schurz beat Lane Tech High School football team. After high school he received a full scholarship to play football at the University of Denver, where he played for a short time. In 1955, Al enlisted in the Army, where he spent time in both Japan and Korea as a helicopter propeller mechanic, and received a sharpshooter medal. He returned home to Chicago in 1958, where he later married Mary Ann Campanella in September of 1960. Together, they had five children and many years of marriage. For about fifty years, Al was a PBX Installer (better known as the telephone guy) for the Bell Company. He was an enthusiast of many different things in life, including opera, classical music, gardening, billiards, horseshoe, chess, Disney, expanding his mind, and of course his truest passion was the love he had for his 1969 Camaro SS. Al spent many years post retirement with his second family the Joern’s, who he met through frequent trips to Busse Woods. He had a loving relationship turned friendship with Tina Joern, who later became his caregiver. Al will be remembered for his goofy sense of humor, gift for gab, and his kind heart.

We’ll see you again at the great phone booth in the sky, as Al lightheartedly referred to as heaven.