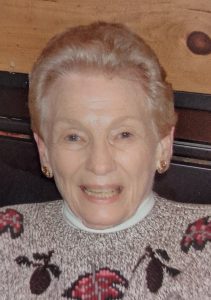 Alice received her nursing certification from St. Francis Hospital Nursing School in Chicago in 1951.  She became a head nurse at St. Francis where she met and married Dr. Ronald Hudec.  They moved to San Francisco where they lived while Ronald served in the Navy, and where their first two children were born.   After Ronald’s service, they moved back to the Chicago area where he began his medical practice and Alice devoted her energy to raising their growing family.

Alice was a dedicated homemaker and devoted mother to her six children.  She was an active member of St. Colette Catholic Church and an enthusiastic volunteer at the school. She enjoyed her Thursday shopping trips, bowling with her leagues, spending time at their vacation home in Pensacola, FL, watching the Cubs play, and she was famous in the family for her mini golf skills.  Above all, Alice loved spending time with her children, grandchildren, and great-grandchildren.

In lieu of flowers, memorials may be made to St. Colette Catholic Church, 3900 Meadow Drive, Rolling Meadows, IL 60008.