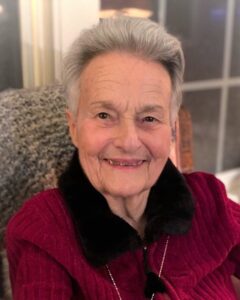 She was preceded in death by her beloved husband, George Grashorn Dickson and her parents Ora and Sidney Buckman.

Growing up, Ann spent many happy childhood days with her Aunt “Mimmie” Cushing on her beautiful property (now named Mildred Cushing Woods). Ann ensured upon her aunt’s death that the land would be donated to the Hingham Conservation Commission in Massachusetts, to be enjoyed by all. She earned her Bachelor of Arts degree in Music Education from Boston University and taught for a grand total of one year. Although she loved children, she found she did not love the classroom setting and transitioned to working as an Executive Assistant in a bank instead – an experience that would serve her well later in life.

When a girlfriend suggested a two-week Caribbean cruise in the spring of 1956, Ann eagerly accepted, and within 10 days met her soon-to-be-husband George and became engaged. Four months later they were wed, and spent the remaining 46 years of George’s life happily married.

Ann was a tremendous hostess to a great many parties: annual 4th of July festivities, lobster cookouts, poolside get-togethers, and, of course, the infamous corn roasts. Her wicked sense of humor was appreciated by all, and more often than not directed inward, laughing at herself whenever she slipped into her native Bostonian accent.

An active part of both her community and the lives of her children, Ann was a Campfire Girl and Brownie Leader extraordinaire. For many years she held office as President of Kildeer Countryside’s PTO as well as President of the Long Grove Historical Society. She also served as an election judge and as Treasurer of the Adlai E. Stevenson High School Band Parents Organization. Both she and George bravely chaperoned their fair share of band trips as well.

Her involvement in the lives of her family extended to not only the hobbies of her children but of her grandchildren as well. Ann was an avid supporter of their extracurricular interests, and could often be found sitting on the bleachers, enthusiastically cheering on her grandkids in all of their sports. There were very few summer days when the Lake Zurich H.S. football team was not relaxing at her pool after her grandsons’ football practices.

Ann carried her passion for music all throughout her life. She and George were patrons of both the Chicago and Elgin Symphony Orchestras, and she regularly attended concerts at Ravinia as well as musical theater productions at the Lincolnshire Marriott. Ann was a member of the St. Michael’s choir for many years.  She was also known to burst out into song among her family during many a conversation. Although she always held classical music in the highest esteem, she confided that while driving she would occasionally listen to jazz or even country whenever her dear George wasn’t in the car. Her love for music lives on in her children and grandchildren.

In lieu of flowers, memorials in honor of Ann may be made to:

or the Alzheimer’s Association (https://act.alz.org/site/Donation2?df_id=32112&32112.donation=form1&utm_source=google&utm_medium=paidsearch&utm_campaign=google_giving&set.custom.wt=giving&gclid=Cj0KCQjwsZKJBhC0ARIsAJ96n3WLJY-5Epxk-boIYrEgGvpA1FDQw6PYcshaslNNasS5lNFTXcIL6_saAgM2EALw_wcB)