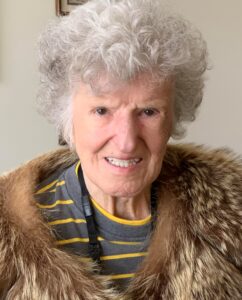 A Memorial Service for Anne M. Klobuchar, 98, of Lake Barrington, will be held at a later date in Gilbert, MN.

Anne spent holidays, like Christmas, New Year’s Eve, and Easter with friends and family. She loved her nieces and nephews, great nieces, and great nephews. She took some of us to ballgames at Comiskey Park to watch the White Sox play.

She didn’t drive, but rather took the bus and got rides with family members. She was a member of the Croatian Lodge and went to their picnics for lamb roasts and lodge dinners.  She enjoyed close ties with the Vukelich Family, including Louise (John) Tancibock, Ann Bombich (Hank), and Katy Fuoss (Vince).

She loved visiting her mother, Mary, her sister, Mary, and her brother, Jack, and their families in Gilbert, MN. In the Chicago area, she attended weddings and graduations of family members of her sister, Katherine (Mike) Bilas, and her brothers, Joseph (Anne), John (Antoinette), and Luke (Pauline) Klobuchar. She went fishing with brother, Luke, and family at White Face Dam in Minnesota.

She loved to travel. She went to Maryland to visit sister Margaret (Russell) Purvis and their six children as well as to California and Oregon to see Georgia (David) Applegate and Jesse and to Massachusetts to see Michael (Kay) Bilas and Kirsten, Michael Jr., and Amanda. She, Sister Mary, and Andrew Snyder traveled to Croatia and Slovenia to see where her parents were born and grew up. When the opportunity arose to go to Spain for a wedding, she jumped at the chance. She went with Sister Katherine and niece Jeanne and family.

She was like a second mother to her nephews and nieces.  She was fun to be around, very caring, and thoughtful.

Donations are appreciated, in Anne’s memory, to the Alzheimer’s Association.