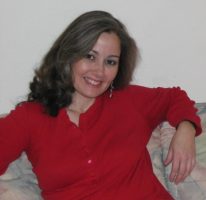 Services and Interment for Brenda Elizabeth Cyr, 53, of Palatine, will be held privately with the family.

Brenda passed away on Monday, September 5, 2022, in Barrington, IL. She was born on December 31, 1968, in Lancaster CA and moved around California with her family for the first 8 years of her life. The family then moved to Montrose, CO where Brenda spent the next 6 years. While there, Brenda enjoyed nature and the beautiful changing of the seasons. When she was 15, her family moved back to California, this time in the Half Moon Bay area. Brenda graduated from Half Moon Bay High School in 1987 and was part of a small choir that performed for the ceremony.

After high school, Brenda moved out to start her own life and went to Skyline College. She majored in pre-med, and while she excelled in her studies, she found time to volunteer at a suicide prevention hotline, a rape crisis center and a battered women’s shelter.

Brenda moved to Illinois in 1990 where she resided in the NW suburbs of Chicago. She began working at Tara Communications, a small private cable company. Tara was bought out several years later by OpTel Inc., a larger cable company. It was at OpTel that Brenda met Andrew Flessner. After 2 years of dating, Brenda and Andy got married on April 6, 2000.

After a difficult pregnancy, Brenda and Andy were blessed with a premature baby boy, Kyle Andrew Cyr-Flessner on December 8, 2000. Two years later, the couple was blessed with a premature baby girl, Anathea Elizabeth Cyr- Flessner on December 2, 2002. Brenda enjoyed being a mother and took the job seriously. She volunteered at the children’s grade school, Lake Louise Elementary in Palatine. She was very active in the PTA and was an active room mom. While the kids were in grade school, Brenda also went to college online and received her Bachelor’s Degree in Business Management.

When the children moved on to middle school, Brenda started volunteering in the Lake Louise Library as an assistant to the Librarian, Mrs. Lisa Jauch. Brenda enjoyed working in the library helping students find books. After several years, Mrs. Jauch transferred to teaching 2nd grade and Brenda became a volunteer teacher’s assistant. Brenda enjoyed working with Mrs. Jauch for 2 years in the classroom.

Brenda enjoyed many hobbies including jewelry making, quilting, baking, reading, trips to the Chicago Botanic Gardens, writing children’s stories, playing board games with her children and arts and crafts.

Memorial donations may be made to the Kyle and Ana college loan fund.