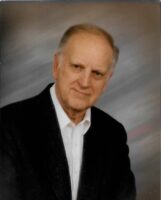 Born in Buffalo, NY to Raymond F. Brown and Elizabeth M. Brown, nee Mager, The family moved to Chicago in 1939. Clay graduated from Hyde Park H.S. 1947, having participated in football and track earning his letters. He then attended junior college nights at the Illinois Institute of Technology.

Mr. Brown is survived by his wife, sons, daughters, eleven grandchildren and three great-grandchildren, soon to be four.

In 1952 Clay and Jeannine built a home in Palatine, IL where they resided for 23 years. Mr. Brown was active in community affairs serving as President of the Community Council and Vice President of the Palatine Kiwanis. As a voice for the residents he was twice elected Trustee to the village board.

In 1968 they purchased property in Kildeer, IL and later built a house moving in 1974. Mr. Brown served on the Village Planning Commission and was elected on two occasions as Trustee to the Kildeer Village Board. In 1997 the village President, knowing Mr. Brown’s interest in local history, asked if he would write a book about the little known history of Kildeer. He authored “A Little Bit of History” which the village published and rewarded him with the title of Village Historian. He also served as the first President of the Kildeer Police Pension Board.

In 1977 Mr. Brown joined Brand Industrial Services, Inc. (BISCO) as sales manager rising to the position of President. BISCO provided specialized construction services in the building of nuclear generating stations in the United States and six foreign countries. He retired in 1991.

Always having an avid interest in nature and the outdoors Clay managed their seven acre home site in accordance with an Illinois Forestry Management Program clearing brush and felling trees himself, frequently making it a family affair. Clay and Jeannine enjoyed traveling to many Asian and European countries.

In lieu of flowers, please make a donation in Clayton’s name, to your favorite charity benefiting animals.