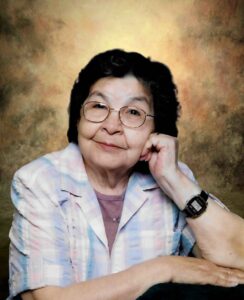 Visitation for Concepcion “Connie” V. Ramon, 88, formerly of Barrington, will be from 3:00 PM until the time of the Funeral Service at 7:00 PM on Connie’s birthday, Saturday, March 13, 2021 at the Ahlgrim Family Funeral Home, 201 N. Northwest Hwy, Palatine, IL.  Join us by streaming at https://webcast.funeralvue.com/events/viewer/49884

Connie was born on March 13, 1932 in Catarina, TX to Santos and Hortencia Villastrigo.  She passed away on Tuesday, March 9, 2021 surrounded by her daughters.

Connie grew up in rural Texas where she met her future husband Vicente.  After their wedding in Carrizo Springs, TX on September 13, 1948, they lived in Catarina, TX while Vicente worked at a ranch.  After several years they moved to Carrizo Springs where they had five children.  The prospect of better work brought them to suburban Chicago where they had an additional five children.  In 1958, Connie and Vicente moved to Barrington, IL where they operated a farm.  After living thirty years of farm living on Long Grove Road, they moved to Round Lake Beach.  Upon Vicente’s retirement in 1995, Vicente, Connie and their son Edward moved to Pearsall, TX.  The following year, Connie was diagnosed with stage 4 colon cancer.  After eleven months of chemotherapy, her cancer went into remission.  On May 12, 1999, Connie lost her husband Vicente of 50 years to a sudden heart attack.  In 2003, Connie moved back to Illinois to be closer to her children.  She was a longtime resident of Green Castle Senior Apartments in Palatine.

It was Connie’s deep love for Jesus that sustained her strength over the years in which she lost two of her daughters.  Elida was 3 when she died in an auto accident and Mary Ellen was 13 months when she died of pneumonia.

Our mom was very giving and loved by all.  Many times she would give others a vase, picture, or anything to put a smile on someone else’s face. She will be remembered for her smile, laughter, and humor. Additionally, she would start singing and dancing.  She was a nostalgic person and everyone loved to hear her stories of the past.