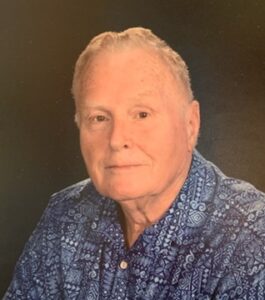 Visitation for David A. English, 80, a lifelong resident of Palatine, will be held Wednesday, January 5, 2022, from 3:00 to 8:00 p.m. at the Ahlgrim Family Funeral Home, 201 N. Northwest Highway, Palatine. David will lie in state, Thursday, January 6, from 9:30 a.m. until the time of the Funeral Service at 10:30 a.m. at Prince of Peace Lutheran Church, 1190 N. Hicks Road, Palatine. The Interment will follow at Randhill Park Cemetery, Arlington Heights.

In lieu of flowers, memorials are appreciated to Prince of Peace Lutheran Church, 1190 N. Hicks Road, Palatine, IL, or JourneyCare.

David was a graduate of Palatine Township High School in 1960, where he met his future wife of 57 years, Elaine. Upon graduation, David enrolled as a pipefitter for Local 597, where he worked in the Chicagoland area for over 40 years. In April 1967, he enlisted in the Naval Air Reserves and served proudly until December 1972. With his two children and wife Elaine, David loved the adventures of RV camping. It was common for the family to embark on a two-week camping adventure every summer. He visited 47 of the 50 states during his life, including several trips with the grandkids. It was his love for camping where he made wonderful lifelong friendships with people known at the “camping group.”

After retiring from the pipefitter union, David started a second career as a bus driver for First Student. He relished his time as a bus driver as one of the happiest. When he wasn’t working, David was an avid golfer, starting as one of the original caddies for Inverness Country Club. He was known for his dedication and volunteerism at Walcamp Outdoor Ministries for over 25 years and served on the Board of Education at Immanuel Lutheran School in Palatine. Later in life, his hobbies changed to raising Koi fish, attending church at Prince of Peace, and hanging with the grandkids.

He was a loving husband, father, and grandfather and will be dearly missed.