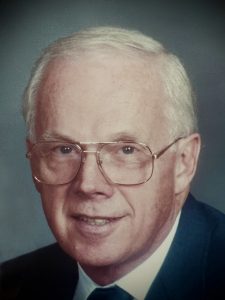 Donald was, first and foremost, a family man. He cherished his wife Marlene whom he met when they were in high school, and he missed her tremendously when she passed away. He raised two sons who admired him and learned so much from him. He was a faithful member of his church community. He served in the military during the Korean War where he served in the Radio Signal Corps. He graduated from Wright Community College and worked early in his career as a draftsman and spent many of his years designing televisions. He also had a short-term project troubleshooting one of the first home video game consoles. He retired from a long engineering and design career at Motorola on 10/4, which he loved because it was the call signal for “okay.” He retired with Marlene to Arizona where they spent the winters enjoying the beautiful weather and views.  He was his grandchildren’s biggest fan, delighting in attending their activities, sporting events, and whatever they were doing. He was an avid and precise do-it-yourselfer, using his incredible talents to build clocks, custom cabinets and beautiful baskets. He also was a car aficionado and would talk about cars for hours if you would let him.  He was fascinated by numerology and had a great sense of humor.

He was the beloved husband of the late, Marlene Ruth Larson, who died in 2011; loving father of Eric A. (Vicky) and Brian K. (Mary); dear grandfather of Andrew E. Larson, Tyler C. Larson, Katharine E. Larson; fond brother of Allen C. Larson.  He is also survived by numerous nieces and nephews.

He was preceded in death by his sister, Jean E. Roush.

In lieu of flowers, memorials may be made to The Alzheimer’s Association or The American Cancer Society.