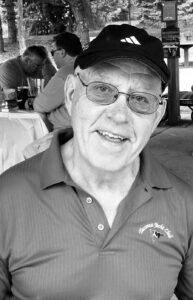 Funeral Services and Interment for Donald William Matter, 84, of Palatine, will be private.

He was born the fourth of five children to Dorothy and Joseph Matter in Menomonie Wisconsin.  Don grew up having many adventures in and around Menomonie with his siblings and many of the stories persist to this day.

After high school, Don served as a Navy Corpsman.  Upon return from the Navy, he attended Chippewa Valley Technical College.  An instructor there told him he was “college material” and indeed he was.  He enrolled at University of Wisconsin Stout and put himself through school, working as a mechanic.  While studying at Stout, he met his future wife, Mary Lee Alexander (an Alpha Phi).

Don started his career working at AC Electronics where he worked on the guidance system for the NASA Apollo missions.  After successful Moon Landing project, Don took a job at General Electric where he helped develop GE’s LandSat Satellite.  He finally worked for Northrup Grumman with a crew of great friends and colleagues and retired in Chicago.  The Northrup group continued to get together socially.

During his career and after he also found time to tinker at home building various electronic devices from scratch like radios and a TV.  He kept up his mechanic skill fixing neighbor’s lawn mowers or the extended family’s boat engines.  Many stories remain from Square Lake near Stillwater Minnesota where many family gatherings were held.  Don held a special place for the large group of nieces and nephews.

Don was an active family man, taking time to coach his sons in baseball and other activities.  Keeping track of the stats and having them on hand for each practice was just one of his habits when he coached.  When time allowed more adventures, he chose to invite many family members and friends to join him for trips to his various favorite spots such as Vail, CO, Hilton Head, SC and Puerta Vallarta, MX.  Fun was had by all who joined for the trips.

In retirement Don was able to enjoy a home on Vashon Island for many years.   He spent time travelling, boating and taking long walks with his close friend, Quiwie Magnuson who predeceased Don.

For the past ten years or so he shared his life with his close friend, Genny in his old neighborhood in Palatine, a suburb of Chicago.  Trips for them included a visit to Hilton Head and a long road trip out to Vashon to share views of Mt Rainier and all that surrounds it, as well as all of their daily adventures.  She gave him great joy and shared a wonderful sense of humor which was evident in both of their smiles.  To say she took great care of Don is an understatement.  His family appreciates her devotion and care especially during the challenging time of Covid restrictions.

Don was predeceased by Mary Lee; his father and mother, Joseph and Dorothy; siblings, Clara Bauer and James Matter as well as his adopted son, Jeffrey Matter.

Don will be missed by many and is survived by his close friend Genny; son, Joseph (Caroline); brothers, Harold and Richard (Kathie) along with a large extended family.

In lieu of flowers, donations to Parkinson’s research or Hospice organizations are appreciated.