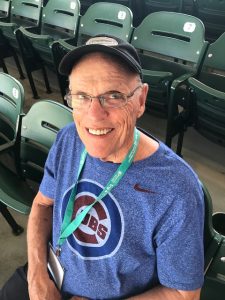 A Memorial Service for Franklin Halsey Ford, 80, of Arlington Heights, formerly of Palatine, will be held Saturday, September 24, 2022 at 11:00 AM at Presbyterian Church of Palatine, 800 E. Palatine Rd, Palatine, IL.  The Interment will be private.

Frank was an eternal optimist who brought a positive attitude and a smile with him everywhere he went. He enjoyed camping and being out in nature, a hobby he passed down to his sons through many years in the Boy Scouts. As an Army veteran he was a hard worker and believer that anything worth doing was worth doing right, which he applied during his over 38 year career at Stepan Company. Frank was a devoutly religious man and an active member of the Palatine Presbyterian Church for over 40 years, often serving as an Elder or volunteering on various committees. It was hard to tell what Frank loved more, the Chicago Cubs or helping people.  Even he couldn’t decide on the night the Cubs finally won the World Series in 2016, so he stayed up all night to watch the game and then immediately headed to Church to volunteer as part of the PADS program to help the homeless. He will be deeply missed by his family, friends, and all who knew him.

Frank was preceded in death by his brother, Kenneth Ford.

In lieu of flowers, memorials will be appreciated to The Les Turner ALS Foundation.