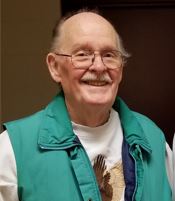 Services and Interment for George Grattan Hill, 85, of Palatine, will be held privately with the family.

George was born and raised in Richwood and Moundsville, West Virginia where he met the love of his life, Jo Ann, at age 15. He went into the Army at age 18 and served for 3 years, during which he was stationed in Germany for 2 years. After his service, George and Jo Ann moved to Chicago, Illinois to create a better life for themselves and their future family. He worked in quality control for multiple manufacturing companies which allowed him to purchase a home in Palatine, Illinois where he and Jo Ann raised their 4 children and enjoyed time with their 10 grandchildren. He was an enthusiastic soccer coach and avid supporter on the sidelines for any sport or activity his grandchildren participated in. His passions outside his family were photography, coin and stamp collecting and genealogy.

He is preceded in death by his parents, Richard Grattan Hill and Evelyn Gainer Hill McCombs and Sister, Debbie Maier (nee Hill).