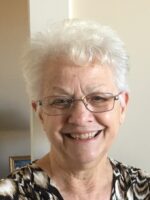 Mass and Interment of ashes for Gloria Jean Mastandrea (nee Walrack) will be announced at a later date.

She was the loving wife of the late Vincent J Mastandrea Sr. and the daughter of the late George and Helen Walrack (nee Mikich). On Wednesday, May 27, 2020, Gloria walked the stairway to heaven, after losing her battle with complications due to Covid-19 and was preceded in death by her daughter Sandi Nudo, her brothers Matt, Steve, Keith, and Stanley Walrack and her daughter in law Marge (Kelly) Mastandrea. Gloria is survived by her sister Kathryn Diamond (nee Walrack) of Pensacola, Fl. in addition to her children, grandchildren, and great grandchildren.

Gloria came to Chicago as a young nursing student at Norwegian American Hospital where she met and married her eventual 56 yearlong mate Vince. Almost immediately, they began their own family and was a loving mother to Vince (the late Marge) Jr., Tim (Kim), Terry (Murlene), Lisa (Mike) Thorn and the late Sandi (Tony) Nudo. While raising their family, Gloria was active at St. Mary Church, and loved her bowling league where she made and kept many lifelong friends. Her true love however, (after her family) was her flower garden where in their second home she won many awards for the design and look of her gardens. Gloria shared her knowledge and love of gardening, as she was a member and twice president of the Buffalo Grove Garden Club of which she was extremely proud. (Her kids would poke fun at her by bowing at the mere mention of her exalted position)

Gloria worked many years at Carson’s Dept. Store after her children had grown, where she made a difference with her flare for style and with her infectious laugh. She was kind, caring and giving to all she met and loved by her fellow employees.

In 1976, the family started growing even more as the grandkids started coming and Gloria cherished each one in her own special way with, Rhianna (Dave) Heinzelman, Kelly (Max) Milinkovich, Dana, Crystal (Nick) Micucci, Patrick (Kelly), Tim (Mindy) Jr., Ryan (Carly), Ashley (Ken) Relic, Daniel, Michael & Joe Thorn, and Anthony Nudo. 2010 signaled the arrival of great grandkids which made Gloria even prouder if that was even possible as she welcomed Luca, Maksim, Nico, Jax, Alessandra & Adriana, Olivia, Adeline, Gianna, Ronny, Blake, Makenzie, Camden, & Dominic to the family.

She will truly be missed by her loving family and friends, but will live on in our hearts forever.