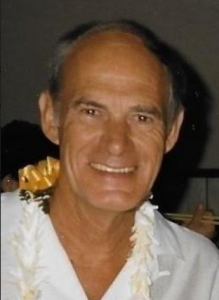 Harry died June 16, 2022.  He had a wonderful life, an admirable work ethic, was blessed by God and was a blessing to others.

Harry is survived by his children Penny (Tom) Treptow and Chris (Catherine) Thill.

He was preceded in death by his devoted wife, Lois Thill; son, Doug Thill; and second wife, Jean Vipond.

Proud father, grandfather, great-grandfather, brother, uncle, friend and colleague to many, he grew up in Lincolnwood and later lived in Park Ridge, Wheeling, Hawthorn Woods, Grayslake, Vernon Hills & Arlington Heights. He attended Niles Township HS, served with the army in Korea, graduated from Northwestern University, was a founding member of St. Hilary’s Episcopal Church, chief chemist for Biwax Corp. and was an active lover of many sports.

In Lieu of flowers, donations are appreciated to Episcopal Church of the Holy Apostles in Wauconda, IL 60084