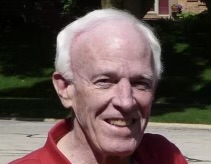 A Memorial Visitation for Hugh H. Gallagher, 83, of Palatine, will be held Friday, April 22, 2022 from 11:00 a.m. until the time of the Memorial Service and Military Honors at 1:30 p.m. at the Ahlgrim Family Funeral Home, 201 N. Northwest Highway, Palatine.  A Private Inurnment will take place at a later date. Visitors are welcome to view the Funeral Service by clicking: Mr. Gallagher’s Funeral Service

Hugh was the beloved son of Harold and Florence Gallagher of Chicago, and long known as the “Skipper” of the family dinner table.  In his earliest years, he proudly served the Archdiocese of Chicago as an altar boy.

Upon graduation from Cardinal Stritch High School in Chicago, Hugh went to work for the White Cap Bottle Company, where he starred for the company baseball team as its shortstop.  It was during this time that he met the love of his life, Patricia.  Although Hugh had to forego his opportunity to play professional baseball in the Phillies organization, he became a lifelong baseball fan and supporter of his Cubbies.  Hugh was overjoyed to see the Cubs finally break their curse and win the World Series.

After a brief time working in the factory, Hugh served his country with honor in the United States Army.  Following his discharge he eventually made his way to the University of Illinois, graduated, and began his career as an executive with a variety of public companies.  He travelled the country and the world, designing and setting up new manufacturing facilities in California, Virginia, Ohio and even the Republic of Ireland.  These facilities each involved hundreds of new jobs in their communities, and he was pleased to know that most of them remain standing and in operation today.

In his youth, Hugh – along with his brothers – developed a passion for tinkering with, and even racing, American cars.  He loved the game of golf, playing out of Cary Country Club for many years.  On weekend afternoons he could often be found chipping and putting his way around the practice green at Palatine Hills Golf Course.

Hugh was a devoted supporter of Illinois and Notre Dame sports.  He enjoyed warm weather family vacations (to escape the Chicago winters) as well as his annual trip to Las Vegas; watching the horses at Arlington Park Racecourse; and, spending time with his friends at the American Legion Post.  He was generous with his time to anyone who needed help.  In his later years, he would frequently drive friends and family to the airport, doctor’s offices, and various locations around town.

But most of all, Hugh loved and was devoted to his family. He was a kind man, thoughtful, with a sharp wit and sense of humor, a strong work ethic, and a profound sense of honor and integrity.  Hugh will be missed deeply by all who knew him.

He is preceded in death by his siblings Florence (Jim) Babusek and Mike (Patti) Gallagher.