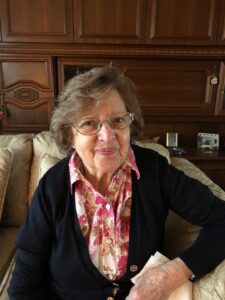 A Memorial Mass for Irène Suzanne Garrett (nee Pellero), 88, of Palatine since 1976, will be said Wednesday, June 23, 2021 at 10:30 AM at St. Thomas of Villanova Catholic Church, 1201 E. Anderson Drive, Palatine. All are welcome to attend. A Funeral Mass will be said at a future date at Old Post Chapel, Fort Myer, Virginia. An Interment will follow in Arlington National Cemetery, Arlington, Virginia.

In lieu of flowers, memorials will be appreciated to Disabled American Veterans (www.dav.org).

Born in a small village in the east of France, Irène was raised by her mother and grandmother. They endured the adversities of WWII. As a young woman, she moved to Paris to be with her brother and aunt and began working in the perfume industry before returning to Sampigny, her hometown.

In 1956, while working as a translator for the US Army, Irène met a handsome young soldier stationed in Sampigny. They were married there in 1957. Over the next twenty years, Bob’s military career took them all over the US and Germany and they endured many hard months apart during his two tours in Vietnam. In 1975, they moved their young family to Palatine, IL where Bob was Regional Representative for the U.S. Army at O’Hare International Airport. Although they retired there in 1996 to be near their girls and grandchildren, they never stayed put for long and travel became their focus. Through the years, Irène never forgot her French roots. She and her family traveled home every chance they could. She raised her daughters to love her culture and speak French fluently. She shared with them her deep passion for travel and the family explored most of the 50 states, multiple European countries and countless other exotic places such as Brazil, Argentina, Egypt, Tunisia, Cuba, China and Russia. Irène and Bob traveled to her beloved France every summer, most recently in 2019, to visit with family and friends.

Irène loved taking photos of her adventures and documented every special occasion, as evidenced by her many photo albums that she so carefully organized. She loved flowers and birds of every kind. She was an avid letter writer and hand wrote over 125 Christmas cards each year. Her friends & family anticipated these annual updates with joy. And it goes without saying that Irène was a wonderful cook who inspired her daughters’ and granddaughters’ culinary skills and love of good food.

Irène was extremely proud of her two granddaughters and spoiled them at every opportunity. They positively adored their “little Mamie”. She influenced so many more to appreciate French culture as well as explore the world. Bob and Irène happily celebrated 64 years of marriage in February of this year. Their example has set the standard for many. As her loving husband remembers fondly, “Irène was one classy lady.”