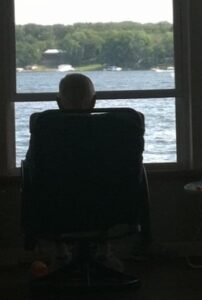 James Henry was born on July 26, 1932 in Niles, Illinois to John Patrick and Margaret Deal. He was the youngest of 3 boys. While in high school, the family move to Delavan lake Wisconsin, where he met the love of his life, Margaret Holdorf.  They married in 1953 while he served in the army during the Korean conflict. Jim studied at University of Wisconsin, Whitewater and Architecture at the University of Illinois at Urbana Champaign. The couple made the northwest suburbs home, where Jim started his long career as an architect/builder; designing and building buildings and raising children. The growing family settled into Prospect Heights where they lived and prospered for more than 25 years. As empty nesters Jim and Margaret later moved to Palatine.

Although he lived and worked in the Chicago area for his entire career, Jim remained connected to his ‘happy place ‘ in Delavan Wisconsin. The family bought a cottage on Delavan Lake in 1973. For the next almost 50 years Jim spent all available summers and weekends, fishing and working on the house at ‘the lake’.

An Architect, Jim opened James Deal and Associates Architects in the late 1970’s. This would become a family business designing and building custom homes in Palatine and the surrounding area that remains active today.  Along with building and creating, Jim loved working with wood.  Over the years he became a master woodworker, building furniture, cabinets and anything else he became interested in. He learned to turn wood, crafting bowls, vases, toys and even a tea set. He often created his own wood working tools to get the effect he wanted. He also loved a good puzzle, a complex problem to solve, or a game to play with his grandchildren.

In lieu of flowers, memorials may be made to the Pulmonary Fibrosis Foundation via https://www.pulmonaryfibrosis.org/get-involved/ways-to-give/donation-faqs