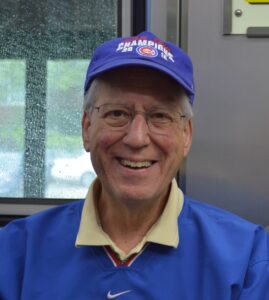 A Memorial Visitation for James R. Wildman, 73, of Lake Zurich, will be held Tuesday, January 4, 2022, from 10:00 a.m. until the time of the Memorial Mass at 11:00 a.m. at St. Frances de Sales Catholic Church, 33 S. Buesching Road, Lake Zurich, Illinois, 60047.  The Interment will follow at Ascension Catholic Cemetery, Libertyville.

The Lord received Jim into Eternal Life on Christmas Eve, the holiest night of the year. Jim brought such incredible joy into our lives as a son, brother, spouse, stepfather, grandfather, co-worker and best friend. While we are happy for him at the end of his earthly pilgrimage, we all miss him beyond measure.

He was preceded in death by his parents James and Sarah Wildman and his twin brother, Jack Wildman.