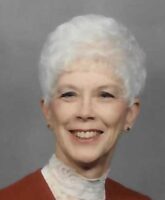 Jean was born in Revere, Minnesota on January 17, 1931, to her late parents, Robert and Stella MaKarrall.  The family moved to DeKalb, Illinois when she was a small child.  She was the fifth child in a family of seven children.  Jean was raised in DeKalb and graduated from DeKalb High School.

After high school, Jean worked in the Registrar’s Office at Northern Illinois University.  At Northern she met her husband, Dick.  They were married on June 30, 1951.  Jean was a loving wife, mother, grandmother and great-grandmother.  When her children married and had families of their own, Jean started Sunday dinners at Grandma’s house.  These family dinners became a tradition which continued for many years.  Jean was a wonderful cook and homemaker.  The dinners were the highlight of Jean’s week.  Her greatest joy in life was when she was surrounded by her family.

Most of Jean’s married life was spent in Palatine, Illinois.  After the children started school, she went to work in the Business Office of Palatine School District 15 and later for the Premier Credit Union, retiring in 2007.  She was a loyal friend with an outgoing personality and positive disposition who was enjoyed and respected by her co-workers and friends.

For many years, Jean was the hostess for the annual District 211 Holiday Party at the Kolze home.  This was for all District 211 Board of Education members, administrative team members from the five high schools and the Superintendent’s administrative team.  Spouses were included.  Jean made all the preparations and refreshments for the party.  She had a knack for making the complex simple.

In her youth, Jean loved to roller skate, and she did a lot of it.  She also liked to dance – fast, slow or line dancing. She was both an excellent skater and dancer.

Jean and her husband loved to travel.  They took many trips in and out of the country and were especially fond of cruises.  Often, they travelled with good friends.  Jean also read extensively and enjoyed working word Puzzles.

The Kolze Family would like to thank her loving caregiver, Gemma, and also the staff of Journeycare Hospice.

In lieu of flowers, memorial donations may be made to the Alzheimer’s Association, Illinois Chapter, 8430 West Bryn Mawr, Suite 800, Chicago, Illinois 60631 or to St. Paul Church of Christ, 144 E. Palatine Road, Palatine, Illinois 60067.