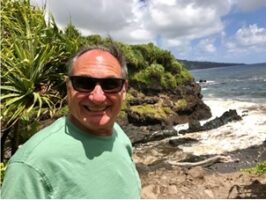 He was the beloved husband of Susan A. Claver (nee Bitz) for 32 years; loving father of Cindy (Jason) Austin, Sara A. Claver and Thomas J. Claver; loving grandfather of Autumn Austin and Kayla Austin; dear son of the late Merwyn and Sandra (nee Polakoff) Claver; fond brother of Steven (Joan) Claver; loving uncle, cousin, and friend to many.

Jeffrey was preceded in death by his father-in-law Chuck Bitz, his brothers, Lee and Todd Claver.

Jeffrey worked as a craftsman for Plunkett Furniture from 1978 until 2000.  He was truly a master of his craft.  During that time, he refinished many notable pieces, including those that were for the archdiocese of Chicago, as well as those that were owned by the late Joseph Cardinal Bernadin.  He was also invited to the Smithsonian Institute to inspect the Wood Conservation Department.  Jeffrey worked as a craftsman at Tom’s Price since 2000, and in 2018 decided to take a partial retirement.

Jeffrey enjoyed keeping himself occupied with house projects, such as remodeling multiple bathrooms and painting.  Jeffrey kept his yard in impeccable condition, and truly enjoyed spending time in the backyard with his family.  He truly cherished the simple pleasures of life – a glass of scotch, watching Seinfeld after a hard day’s work, listening to sports radio out in the backyard, and warm weather.  Jeffrey was an avid Chicago White Sox, Bears, and Bulls Fan.

Above all, Jeffrey absolutely adored his family, and would do anything for them.  Jeffrey always had a smile on his face, and always faced adversity with optimism. He had such an ability to comfort his family in even the most difficult times.

In lieu of flowers, memorials may be made to Helping Paws Animal Shelter, 2500 Harding Lane, Woodstock, IL 60098 or visit (https://helpingpaws.net/donate/) .