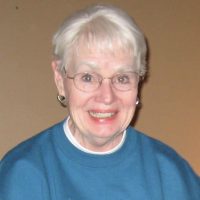 A Memorial Visitation for Joanne R. Trainor, 85, of Lake Barrington, will be held from 4:00pm until 8:00pm on Friday, January 20, 2023, at the Ahlgrim Family Funeral Home, 201 N. Northwest Highway, Palatine. The Funeral Service will be held at 10:00am on Saturday, January 21, 2023, also at the funeral home. An Interment will follow at St. Michael the Archangel Catholic Cemetery in Palatine.

Joanne was born on December 3, 1937 in New York City (Queens), New York to Milton and Dorothy Andreas. She was the youngest of three daughters. Joanne loved taking the subway and bus to Radio City Musical Hall as a young girl and was a life-long Yankees fan. She instilled her love of baseball into each of her children. Joanne met the love of her life, Jim, when he was a cadet at West Point. Shortly after Jim graduated from West Point they were married. Jim and Joanne had four children: Greg, Susan, Carol and Stephen.

Everyone that knew Joanne would describe her as a storyteller. In fact, her children took to numbering her stories they were so prolific. Joanne loved antiquing, seeing plays at the Lincolnshire Theatre, and going to lunch and dinner with her friends, affectionately known as the Q-Tips.

She was preceded in death by her husband, James Trainor; daughter, Susan Trainor; parents, Milton and Dorothy Andreas; and sisters, Dorothy Townsend and Dolores Fletcher.

In lieu of flowers, donations will be appreciated to the Greater Chicago Food Depository or to Veterans Path to Hope.