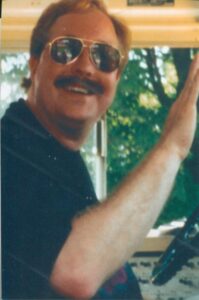 Visitation for John Francis Deamer, Jr., 63, of Palatine, will from 4:00 PM until 8:00 PM, on Monday, November 8, 2021 at the Ahlgrim Family Funeral Home, 201 N. Northwest Hwy., Palatine.  Funeral Services will begin at 10:00 AM on Tuesday, November 9, 2021, also at the Funeral Home. The Services will be live streamed; you may join us at this link, https://webcast.funeralvue.com/events/viewer/63257  The Interment will be at Windridge Memorial Park Cemetery, Cary, IL.

John was born in Houston Texas in 1958, son of John and Annie Deamer. He was the middle child of 4 sisters. The family has always been tight knit and moved around the country to become successful until they moved to Palatine, IL, where they found a community they called home.  John and his sisters quickly made friends at school, with all the siblings graduating from William Fremd High School. John had an interest in writing and photography. He became lifelong friends with Richard and Michele (Morelli) Varnadore, where they shared lots of fond memories.  He loved to paint, be creative, sing, and show affection to his loved ones with his generous spirit.  After high school, he attended college at the University of Missouri, Columbia, but ended up moving back to Palatine, getting married and having three children.  Working to provide his family with all the things they needed. He became a manager at a Taco Bell and a 7-11, working two jobs to care for his family. He then took another job as a bus driver to make ends meet where he made a lot of lifelong friends.

In 1998, he started working for his father, John “Red” Deamer, at the family company, Shamrock Chicago. He quickly learned the ropes of the company and made strong bonds with business friends who he would stay in contact with long after some of them retired. In 1999, John Jr. took over the company after his father died. John worked long hours and valued his achievements in business. He worked up until the day he died.

He was a hardworking, funny, generous, supportive man who had a real zest for life. Everywhere he went he made friends. He knew how to make people laugh and always had an interesting story to tell.  He loved films, television, and could answer any trivia question he was asked. He was a brilliant man in his own right with a very generous heart. He was an avid history buff and a fun loving person who loved to see people smile.  He was a great man with a heart of gold. He will be missed by many.

He is preceded in death by his father, John Deamer in 1999 and his sister, Margaret Mary Wroblewski in 2014.

In lieu of flowers, please donate to our charity of choice or the Salvation Army. To directly donate, please access this website, John Deamer Jr.’s fundraising page, https://give.salvationarmyusa.org/fundraiser/3577456