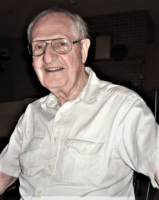 Jack died peacefully on November 15, 2019, surrounded by his family and the loving nuns, caregivers and staff at St. Joseph’s Home for the Elderly. Jack is survived by the love of his life, his bride of 67 years, Ellarita M. (nee Mills); his children Mary Ann (Jack) Breisch; Lizbeth Wolfe (Gary Shanafelt); Michael (Molly) Wolfe, and Theresa Wolfe. He was the cherished grandfather of David Ranucci; Benjamin and Sarah Breisch; Brendan, Maura, Danny and Ryan Wolfe; and the great-grandfather of Johnathan Ranucci. Jack is also survived by his sister-in-law, Bente Wolfe, many nieces, nephews, extended family, and friends old and new. Jack was preceded in death by his parents, John and Lillian (nee Roth) Wolfe; and dear siblings Michael Wolfe and Patricia Traeger.

Jack (a.k.a. “Cactus” Jack) was the Jack of all trades and master of many. Throughout his life, Jack was all about enjoying the journey and less about the destination.

He had a lifelong love of sailing, working summers on sailboats on Lake Michigan, crewing for The Southern Cross that competed in the Chicago to Mackinac Race, and, of course, serving in the Navy on the USS Samaritan during World War II.

Following the war, Jack attended Lewis University on the GI Bill and then the University of Arizona where he obtained a mining engineering degree and developed another lifelong passion – the Southwest. Following graduation, he worked in the copper mines in Tombstone and Mammoth, Arizona. He was proud of his collection of mineral deposits and could tell you the composition and characteristics of the Malachite and Iron-Nickel specimens he honed from the mines. He displayed his collection on bookshelves throughout the house, including his room at St. Joseph’s Home. His love of the desert and the culture of the Southwest left an indelible mark on him that he carried throughout his life.

Besides the water and the desert, the other natural beauty in Jack’s life was Ellarita “El” Mills. Jack and El grew up down the street from each other on Luella Avenue on the south side of Chicago. El rescued Jack from the desert and they were married in Chicago in 1952. Eventually, Jack’s work as a design engineer and site location specialist lead them to Cleveland, Ohio, where he and El raised their four children.

Throughout his life, Jack was a voracious reader who steeped himself in the study of history, geopolitics, philosophy, religion and the arts. While he loved working in the yard or at his workbench in the garage, he also delighted in attending the theater, the symphony and supporting his children in their artistic, musical, and athletic endeavors. He had encyclopedic knowledge of composers, conductors, artists, presidents, rulers and popes. He could tell you the history of communism, what kind of bird was perched on the feeder, and all about the species of the tree next to the feeder. He loved to debate politics, religion and just about any other topic on which one was foolish enough to engage him. He composed humorous (sometimes romantic) poems and rhymes about life and politics and wrote letters (okay, missives) to members of Congress and the clergy with his views on their job performance. It seemed that nothing was beyond his grasp, including the unwitting family member or friend who would make the mistake of asking “What’s new Jack?” Next thing you knew, you were traveler on Jack’s journey.

Jack and El returned to Chicago in 2014 to be near their son and daughter in law, Michael and Molly (and family), and became very fortunate residents of the St. Joseph’s Home in Palatine, operated by the Little Sisters of the Poor. So many of the Sisters, staff and residents have recounted their experiences with Jack, with the common thread being that Jack loved to engage with people, tell them his story, and learn about theirs. He loved these encounters. He loved people. He loved life. He will be missed but never forgotten.

The family is eternally grateful to the Little Sisters of the Poor for providing Jack with the most peaceful and loving environment in which he spent his final days.