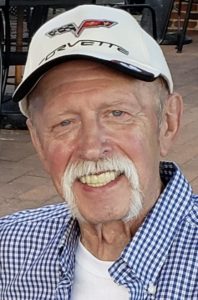 A celebration of life for John Richard “Rich” Kovac, 80, of Palatine, will be held privately at a later date.

John was the beloved husband of Charlene Kovac. He is also survived by his children, Adam Kovac (Meredith); Eve Reineke (Rick); and Kevin Kovac; stepdaughters Bonnie (Eric) Yates-Reutell and Jennie (Terry) McKee; and grandchildren Al, Nick, Vyvyan, Quinn, Ethan, and Charlotte. He was also the uncle of many nieces and nephews.

He was preceded in death by his parents and his brothers Larry, Paul, and Tom, as well as his daughter Carrie.

Rich was an “every man” type of guy who had a great sense of humor. He loved his family and his country, and had many interests, from playing and watching sports to taking photos of large birds such as bald eagles in the Fox River Valley.

Rich met Char at Dumas Walker’s on March 4, 1995, thanks to the “keeper of the stars,” as their favorite song says.  After that, they danced together through life for 27 wonderful years. They had a great deal of adventures and travelled widely, from Hawaii to Panama and Mexico to Vancouver Island. Rich and Char danced, snowshoed, swam, bicycled, hiked, watched Chicago Bears games, and shared many hugs, kisses, and laughs. He was the most gracious husband. He never raised his voice, held a grudge, or got mad at her, even when she says that she deserved it. Instead, he would always tell her, “I still love you.”

Rich was a tool and die maker for many years, and later, a handy man. He could fix anything. He took a calm, confident approach to life. “Don’t worry about it” was Rich’s advice for almost any situation. He was also spontaneous, flexible, and generous, and accepting of moving through the seasons of life.

Rich was devoted to his family members and would do anything for them. He was naturally gifted at playing with his grandkids, probably because he was always a kid at heart. He was also a natural-born storyteller and was at ease talking with anyone anywhere. These abilities helped him make and keep many friends over the years, including his lifelong friends Lee, Ron, and Butch (the last of whom passed before he did), and all the other pals he met for lunch at one of his favorite restaurants, Portillo’s.

Rich was a valiant warrior as he faced cancer four times. His grace and strength at the end comforted his loved ones. He will be missed by everyone who called him Dad, Djziazia, Gramps, Papa, friend, or sweetheart.

In lieu of flowers, the family asks that you consider donating to the American Cancer Society in memory of John Richard Kovac.