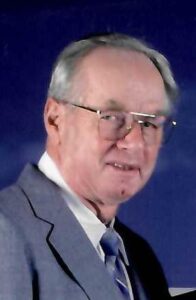 A Memorial Visitation for John W. Laws, 85, of Inverness, formerly of Oak Park, IL , will be held Saturday, June 19, 2021 from 9:00 a.m. until the time of the Memorial Service at 12:00 p.m. at the Ahlgrim Family Funeral Home, 201 N. Northwest Highway, Palatine.  A private family Inurnment will be held in Mt. Hope Cemetery, Palatine.

Those unable to attend are welcome to join the Funeral Service at: https://webcast.funeralvue.com/events/viewer/55582

John was an avid fisherman and traveled with his wife, Shelby, of 65 years. He was employed for 43 years with Goodyear Corp.  Along with his love of fishing, he enjoyed gardening, being outside, and spending time with his family.  John never met a stranger.  When he called you a friend, you were his friend for life.