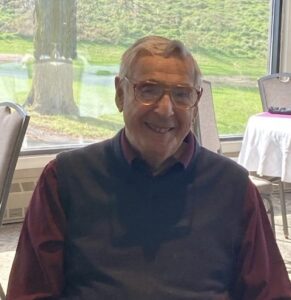 The Visitation for Joseph Anthony Bondi, of Deer Park, will be held on Monday, January 17, 2022, from 2:00pm until 8:00pm at the Ahlgrim Family Funeral Home, 415 S. Buesching Road, Lake Zurich.  A Funeral Mass will be said on Tuesday, January 18, 2022, at 10:00am at St. Theresa Catholic Church, 455 N. Benton Street in Palatine. The Interment will take place at St. Michael the Archangel Cemetery in Palatine, immediately following the Mass.

The final chapter of a quintessential American story was finished on January 8, 2022, when Joseph Anthony Bondi, the son of Sicilian immigrants and father of nine children, was called home to God and passed away peacefully, surrounded by family.

Born to Joseph and Catherine Bondi in Pittsburgh, PA on October 29, 1930, Joseph was the fifth of six children. He attended the University of Pittsburgh where he graduated with a business degree in 1952.

Joseph was a devoted husband to Margaret, a provider to his children, a veteran to his country, and the patriarch of a great family.

While the story of Joseph’s time on earth has ended, his impact and legacy will span generations. He is survived by his wife of 59 years, Margaret (née Windisch); sister Joan Frangona; children Joseph (Margaret) Bondi, Robert (Kathleen) Bondi, Rose (Frederick) Curry, Mary (William) Sullivan, Patricia (Richard) Ripoli, Daniel (Stephanie O’Boye) Bondi, James (Loretta) Bondi, Ruth (Gregg) Boeke, and Maria (Jeffrey) Walter; twenty-eight grandchildren; three great grandchildren; and many nieces and nephews, all of whom are blessed to have been a part of Joseph’s story.

In lieu of flowers, we ask that donations be made to your favorite charity, in Joseph’s memory.