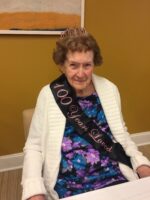 Visitation for Juanita Jane Wagner, of Arlington Heights, will be held on Friday, September 11, 2020 from 1:00 pm until the time of the Funeral Service at 2:00pm at the Ahlgrim Family Funeral Home, 415 S. Buesching Road, Lake Zurich. The Interment will immediately follow at Lake Zurich Cemetery.

Juanita Jane Wagner passed away Sunday, September 6, 2020, at Church Creek Senior Living in Arlington Heights, Illinois, in the 101st year of her life.  Born Juanita Jane Holmes on September 2, 1919 in Georgetown, Illinois, she was the 14th and youngest child of Charles and Bessie Holmes.  Juanita was a 13th generation American.  She graduated first in her class from Georgetown High School and was awarded an Illinois State College Scholarship but instead moved to Chicago where she lived with sister Lena Sawicki and worked for Children’s Activities.  Juanita married Herbert Gus Wagner in 1939 and lived in Chicago until building a home in Lake Zurich in 1951.  After Herb’s passing due to multiple sclerosis in 1982, Juanita continued to live in their home until 2017 when she moved to a senior living apartment.  Juanita was a tireless working mom, care giver to Herb, and head secretary for many years at Ela Vernon High School (today renamed Lake Zurich High School).

She was a member and secretary of St. Peter’s United Church of Christ in Lake Zurich.  She enjoyed the Red Hats, rooting for the Cubs, Friday night card games, and travel to Alaska, Hawaii, and Europe.  Shown here at her 100th birthday celebration, Juanita is survived by sons Wayne and Dan Wagner; grandchildren Carolyn, Jaclyn, Jeannine, Kristan, and Kurt; and 10 great grandchildren.