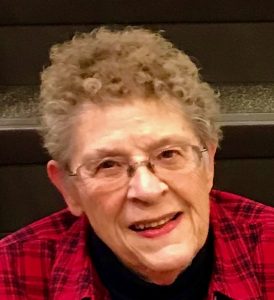 A Celebration of Honor for Julia Meredith Hoats will be held at Ahlgrim Family Funeral Home, 201 N. Northwest Highway, Palatine, on Tuesday, September 27, 2022, from 10:00 am until 12:00 pm, with a special toast to Julie at 11:30 am. The Interment will be at Oakwood Cemetery, Lowell, MI.

Julia Meredith Hoats spent her last 80 years living an incredibly rich life that came to a peaceful end in Palatine, Illinois on September 8, 2022. She was born on March 24,1942, in Lansing, Michigan, to Florence and Rev. Elmer Hoats, a Congregational minister. In her final days, while unearthing her books, artwork, photos, and the trinkets saved in worn wooden boxes, we discovered surprising facets of the person we had come to know, but maybe didn’t after all.

In Lansing, enamored with the horse who delivered the daily milk, she begged to ride, and would later become a talented equestrienne and riding instructor. Horses were a constant in her life, even as she hopscotched through the country with her family and father on his Congregationalist parochial assignments – to Chamberlain, South Dakota; Chadron, Nebraska (where all the parishioners apparently owned horses); and Illinois.

Growing up, she was very close to her mother’s family in Somonauk, Illinois. Every July was spent at Grandma Ida Julia’s home, surrounded by her five aunts and many cousins. Three of her aunts were unmarried, yet successful, well-read, and full of tales of their travels. Unusual for that time, these qualities surely influenced Julie’s fierce independence and “trail-blazing” attitude.

As a teenager at Chadron Prep School, she excelled at everything she touched – from becoming Band President, Tennis Star, Student Council President, and Valedictorian – to attaining an honor she sequestered from her adult friends -“Prom Queen, 1960.” (Oh, Julie, we barely knew ye…”)

On graduation, she enrolled in her dear Macalester College (St. Paul, Minnesota), majoring in Religious Studies. Always a determined, intelligent, and stubborn questioner, she surprised her parents when she switched her major to Physical Education, becoming a force for change in the fight for equal footing for women in sports. She received her Baccalaureate in Physical Education in 1964.

This passion ignited at Macalester, but carried through the rest of her life: teaching in California, (where she finally owned a horse), and Palatine, Illinois, where she settled in her career with District 15. A beloved PE teacher at Joel Wood, Sanborn, and Paddock schools, she also assumed leadership roles with the National Education Association, the Illinois Education Association, and the local union, the Classroom Teachers’ Council of District 15.

An avid sports fan and athlete, she loved her tennis, the Olympics, and baseball, specifically her Chicago Cubs. Her life dream was to visit every major league baseball stadium in the US with her friend Pat, and we believe she accomplished that goal.

Her cozy home reflected the prismatic colors of her life – a love for cats, books, gardening, the West, cooking, and the theater. She was an intellect and a puzzle; we learned as much about her in her final days as we had learned about her during her expansive life.

She’ll be missed by her close friends Barbara and John Figlewicz, Tam Fletcher, her Broadway in Chicago theater group, Palatine Garden Club, the Sanborn “Poets,” many friends and caregivers, her adoring sisters, and her most beloved black cat, Coco, who kept vigil until her passage.

Julie is survived by her sisters Mary Culham of East Lansing, MI, and Margaret Hoats of Lowell, MI, four nieces, two nephews, many grand nieces and nephews, and cousins. She was preceded in death by her parents, sister Barbara Still, and brothers Jay and Joe Hoats.