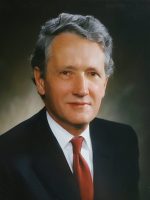 This week we bade a farewell to a devoted husband, father, scholar, diplomat, and business executive. The Honorable Kenneth W. Dam, was born in Marysville, Kansas, to first generation immigrant farmers Oliver and Ida Dam, and was younger brother to Silves Dam.

Ken was a devoted public servant. Starting in 1971 as Assistant Director in the Office of Management and Budget, he became Executive Director of the White House Council on Economic Policy under George Schultz. He returned twice to Washington DC. First as Deputy Secretary of State for President Ronald Regan, he played a role in the transformation of East-West diplomatic relations. Later as Deputy Secretary of the Treasury, under President George W. Bush, Ken led the financial response to the 9/11 attacks, bringing together the governments of 130 separate nations in the global War on Terror.

Ken also had an important career in the private sector. He served as IBM’s executive vice president of Law and External Relations and later worked as Arbitrator in the Players Collective Bargaining Agreement with both the US National Basketball and National Hockey Leagues. He also served as the interim president of the United Way of America, as co-chairman of the Aspen Strategy Group, as chairman of the German-American Academic Council, as a member of the Steering Committee of the Bilderberg Group, and on the American board of directors of both the Alcoa Corporation and BMW.

Ken was a generous husband, father, and grandfather. From walking his children to school to traveling with his family all over the world to learn and practice many foreign languages, he inspired everyone with his insatiable curiosity, humility, and vigor. He was a life-long student.  Ken died peacefully at home surrounded by his family. He is survived by his wife of 60 years, Marcia, son Eliot, daughter Charlotte and his grandchildren Benjamin and Fiona.