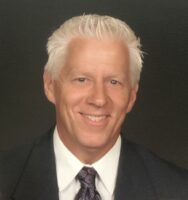 Kevin was born to Owen and Lee Keenan on January 5, 1959 and died suddenly on February 4, 2020 in Eagle River, Wisconsin. Kevin was a loving and devoted husband to Donna, and an extraordinary father to his beloved daughters, Courtney and Meghan.

Kevin grew up the third of four children on ten acres in Glenview, Illinois. Throughout his childhood, Kevin was very active outside, playing sports or taking care of the many animals they had. His stories of sibling rivalry and good natured hilarity are ones for the books. On a sunny summer day you would find Kevin practicing his fast pitch or perfecting his layup. Kevin’s love of sports included his Chicago Cubs, Blackhawks, and Bears. His competitive nature and emotional investment in these games were an example of the passionate way he lived his life.

While receiving his Bachelor’s degree in Operations Management from Northern Illinois University, Kevin met the love of his life, Donna Anderson in the study room of their dorm. It was here where their relationship started, and they later married on May 27th, 1984. Kevin and Donna began their life together in Chicago, near Wrigley Field. They later moved to Palatine, and then finally to Lake Zurich, where they lived for 30 years.

During Kevin’s years in Lake Zurich, he would volunteer as a soccer coach for his daughters’ teams from first grade through high school. He never missed a choir concert or show, and he was endlessly proud of his girls. He was a beloved member of his church, St. Peter’s, and even realized his (not surprising) talents as an actor, starring in one of their theatrical productions.

Throughout his career as a corporate tax auditor he worked for the states of Illinois, New Jersey, Michigan, North Carolina, and Washington. For the last ten years, he worked as an auditor for the USDA. However, his dream job was to be a TV sportscaster.

It goes without saying that Kevin’s charisma was infectious. He was the type of person that could talk to anyone and put you completely at ease. He somehow always knew exactly the right thing to say, even in the most difficult situations. His gentle, caring nature and silly sense of humor made him such a warm, welcoming presence. He was someone you would seek out whether you had just met him or had been his friend for years.

He was a friend to everyone; many neighbors, acquaintances, or even a stranger he met in a crowd. He recently reconnected with some of his beloved fraternity brothers and got to spend time goofing around with them, just like back in their college days.

In the last year, he picked up his guitar that had lay dormant for decades and started teaching himself to play music with a couple of these friends. Every Wednesday, he loved to host the band he brought together for dinner and drinks, and then rock out in the basement. Never one to sit still or stay at home, he was always up for any opportunity to have a blast with the people he loved and live his life to the absolute fullest.

Perhaps most importantly of all, Kevin’s devotion to his parents and family was unrivaled. He was constantly thinking of ways to support others in any way he could. He was a rock that followed through with anything that needed to be done.

To say Kevin was the patriarch of the family is an understatement. Kevin was truly the glue that held us all together. His simple grace, easy-going nature, and eye for detail made for a natural leader. His laughter would fill the room, and his smile would let him get away with anything.

As impossible as it is to say goodbye, Kevin without a doubt left this world a better place. His mark will be left on all who knew him; Kevin was the pebble that started a ripple. May that ripple lead us all to more understanding and embracing of life and each other, and challenge us to be better. He and the wonderful memories he gave us will never be forgotten.

In lieu of flowers, donations will be distributed to the Juvenile Diabetes Research Foundation and the American Diabetes Association, a cause that was close to Kevin’s heart.