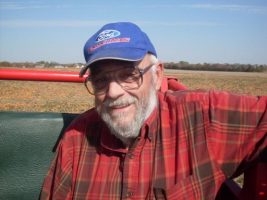 A Memorial Service for Lewis L. “Bud” Woolfington, 84, of Huntley, formerly of Palatine IL, will be held on Sunday, August 7, 2022, at the Church of the Highlands, 1525 W. Plainfield Road in La Grange, Illinois. Visitation will be from 2:00 – 4:00 p.m., with a Memorial Service planned for 4:00 p.m. with a reception immediately following.

Born on November 4, 1937, and raised in Clinton County, Indiana, Bud came to the Chicago area in 1956.  He began his career at Universal Oil Products in Des Plaines, at the invitation of his Uncle Jack. Following a stint in the United States Army, where he served with the 13th Field Artillery, 24th Infantry Division in West Germany, Lewis returned to UOP where he worked for 42 years until his retirement.  In addition to his shift work at UOP, Lewis worked to support his family with painting, scrapping, junking, and clean outs.  In his retirement, he never missed an auction or an opportunity to help his longtime friend, John Prigge, with a clean out.  Lewie was generous with his time and enjoyed serving behind the scenes for both his son’s and daughter’s churches in La Grange and Elgin, Illinois.  Lewie lived at his home in Palatine until 2019 when he moved into White Oaks Huntley.  Due to his dementia, he lived in the memory care unit. There Lewis was loved by the staff and other residents, and lovingly referred to as “Grandpa” to all until he passed peacefully on July 19, 2022.

Lewis married his wife of 34 years, Janet, nee Wente, in 1981, and they made their home in Palatine until her death in 2015. Together they enjoyed their vacation home in Buffalo, Indiana, their grandchildren, the Barefoot Hawaiian Hula Dancers, and the 4th of July festivities in Palatine.  Lewie never missed an opportunity to share ice cream, French silk pie, or donuts with the ones he loved.