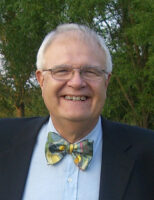 Burial and a Celebration of Life for Marc D. Denny, of Lake Zurich, will be scheduled at a later date.

After a life full of love and laughter shared with a huge circle of family, friends, and
colleagues, Marc died peacefully on April 19, 2020. He will be
remembered for his wit and sense of humor, his joyful nature, his athletic achievement, and for
teaching, helping, and inspiring many.
Marc was born Feb. 3, 1942, in Bedford, Ind., to Morris Duane “Beany” Denny and Helen
Pentzer Denny.
His childhood in Bedford was consumed by activities with his large family and numerous
friends. Throughout his life, he recalled with fondness the holiday gatherings (especially
Christmases), the outings around Southern Indiana and beyond, and the boyhood adventures at
his home on “O” Street and throughout Bedford.
One noteworthy event was a bicycle race that his group of friends put together in the
summer of 1958. They dubbed it the “Miniature 500,” nodding to the Indianapolis 500 and to
the Little 500 at Indiana University in Bloomington. The local newspaper published a story
about it, including a photograph in which Marc, atop a bicycle, was prominent.
When it comes to naming the many family members and friends who took part in this
and other stories, Marc said, “President Eisenhower once said—to someone, not me—‘Don’t
try to list everybody you want to recognize, because you’ll always leave someone out.’ So let’s
not try.”
Ten years before the bike race, at age 6, Marc survived being struck by a moving car as
he rode his tricycle near his home. The collision, which threw him high in the air, broke his leg
and gave him a prominent scar that grew as he did, and he grew plenty—by the end of high
school, he was 6 feet, 8 inches tall.
In addition to height, Marc possessed natural athleticism, and he excelled at numerous
sports. While he was in high school, the local bowling alley selected a local amateur to take on a
professional. Marc was chosen, and he gave the pro a scare. Though the pro ultimately won,
midway through the game Marc said he heard the pro say, “This kid is going to beat me.” There
was also football, baseball, slow-pitch softball, golf, and tennis. With tennis, he often boasted

about being Bedford city champion. Once he let that fact set in, he would offer a disclosure:
“Only two people entered the tournament.”
He was most accomplished, though, on the basketball court. He used his size and skill to
great effect and was a standout for the Bedford High School Stonecutters, scoring more than
800 points in his career. Donning No. 53, he averaged 24 points per game in his senior season,
earning him an alternate spot on the 1960 Indiana All-Star team.
He was widely recruited, and he chose Butler University, in Indianapolis. He stayed only
one year, however. “Their expectations were too high,” he said. “They never told me I had to
study.”
Searching for a new school, he chose the one that his girlfriend since high school,
Mayme Jo Williams, was attending—Indiana State University, in Terre Haute. She made the
difference. “She helped me get through,” he said. Marc also played on the basketball team.
By the spring of 1964, Marc and Mayme Jo had earned their degrees, and on May 29,
1964, they were married in Bedford. This year would have marked their 56th wedding
anniversary.
In that same year, 1964, they accepted teaching positions in Salem, Ind., near Bedford,
where they taught for two years. Marc also coached basketball and other sports.
In 1966, Marc accepted a teaching position at Palatine High School in suburban Chicago.
He taught social science, economics, and anthropology, among a number of subjects; he
coached sports; and, in his early years, served as bus driver “of ol’ No. 14.”
In 1970, Marc earned a master’s degree in education with a major in counseling and
guidance from Indiana University in Bloomington. That education, which he pursued during his
summers off, led him to make a switch at Palatine High School from teacher to guidance
counselor.
By the beginning of 1972, Marc and Mayme Jo had moved into a house in Lake Zurich,
Ill., and were the parents of three boys—J.D., Chandler, and Jack. Another son, Carson, would
be born in 1976.
One of Marc’s longtime responsibilities was serving as senior class sponsor, which put
him in charge of all the class’s activities, culminating with the high school’s commencement. He

aimed to create a graduation ceremony that presented “due respect, decorum, and formality”
for the students and their families. He also delivered an efficient ceremony. Each year, as things
got started, he would tell the audience: “The bad news is, in a few minutes, we’ll be joined by
hundreds of teenagers. The good news is we’ll be done in 60 minutes.”
He said of Palatine’s commencement, “It is my proudest legacy.”
For a number of years, he was stadium announcer for Palatine High School’s home
football games, serving as the “voice of the Pirates.” He found a unique way to give recognition
to each game’s deserving Palatine player: When he would announce the attendance—an
estimate of his making—he made sure the last one or two digits of the attendance number
matched the outstanding player’s uniform number. It became something of a tradition that the
crowd would expect and appreciate.
In 2000, after more than three decades on the job, Marc retired from Palatine High
School. He continued to work there and elsewhere in District 211 on a part-time basis for a
number of years.
Thanks to his longtime involvement in so many activities and his outgoing and positive
personality, Marc was a well-known and popular figure at the high school. Students, alumni,
faculty, and staff spoke highly of him, and many stayed in touch throughout his life. His
retirement party was a huge affair.
Professionally, in addition to his duties at the high school, he taught master’s level
courses to teachers, primarily focusing on classroom management. He was an in-demand
speaker on that topic at numerous schools in the area. He also maintained a private counseling
practice for a number of years.
In his personal life, much of what Marc did revolved around family and friends.
He was an integral part of “trips to nowhere,” a tradition begun by his mother later in
her life. Known as “Nanny” to many, she knew where they were heading; the rest of the group
was clueless, though confident they would arrive somewhere worthwhile. Wherever they
ended up, it was made more interesting by their presence. This crew always managed to create
a good-natured ruckus.

Marc showed his love of athletics throughout his life, both as a participant and as an
observer. He played basketball recreationally into his 30s and for many years was a skilled
bowler and golfer. He carded a hole-in-one in 2008.
He was a regular attendee of area high-school basketball games for decades—especially
games featuring Palatine, Lake Zurich (where his sons played), and Jacobs, in Algonquin, Ill.,
where his son Jack coaches. He also paid close attention to Bedford’s teams. And he always had
a bag of popcorn.
Marc’s activities along the way included serving as a Little League baseball coach;
inheriting a newspaper route from his dog-fearing young son; and, taking over another son’s
pizza delivery gig. With those deliveries, he had assistance from Mayme Jo, who claims she did
all the work.
When his sons played in basketball and football leagues as adults, Marc was there. He
was honorary coach of the Vipers, a flag football team. Later, though it was difficult for him
because of his health, he was in attendance for soccer games and dance recitals of his
granddaughters, who knew him as “Granddad.”
He also managed the family’s “fleet of cars,” which on occasion filled the driveway and
part of the yard. It wasn’t a fancy collection. As evidence, after paying for a family meal, he
would often say, “I’ve had cars worth less than that.” At one point, there was a Honda CB650
motorcycle in the mix.
Marc and Mayme Jo loved rock-and-roll music, and they and friends attended many
concerts around the Chicago area. They went much farther a number of times (the Illinois State
Fair; Branson, Mo.) to see their favorite bands. At these shows—and at weddings and other
gatherings—Marc and Mayme Jo were fixtures on the dance floor. Later in life, blaring his home
computer’s speakers, he would do the Twist with his granddaughters.
He also eagerly took part in countless parties (like the ones at his sons’ Wrigleyville
apartment, “3511”), holiday celebrations, birthdays, and weddings.
In these settings, Marc was sure to share memorable anecdotes, observations, one-
liners, jokes, insights, and opinions that would keep things entertaining. In times of distress or
sadness, Marc proved to be a patient listener, a comforting voice, and a wise guide.

He took to Facebook and attracted more than 1,000 friends. They would get updates on
his activity, of course, but they also were treated to his commentary on Bedford police reports
and were introduced to a new political party that Marc and a friend formed: The Chameleon
Party, whose platform was “We’ll do whatever you want us to do. Just name it.”
Marc loved porch swings, as does Mayme Jo, and they were often seen swinging at their
homes in Lake Zurich and Bedford. For a time, Marc could often be seen wearing his bib
overalls. The porches were popular destinations for their friends and neighbors, and the
conversations were often lively.
Recalling the regular visits to Bedford, he said, “I would get in the house, grab a Big Red
pop, go sit on the swing, and watch the cars go by. I thought: ‘This is heaven. This is my favorite
place in the whole world.’”
As a son, brother, husband, father, grandfather, friend, colleague, and educator, Marc
Denny was a bright light. He will be greatly missed.
He was preceded in death by his parents; his brother, John Denny; and his sister Julie
Denny-Hughes.
Marc is survived by his wife, Mayme Jo (Williams) Denny; sons J.D. Denny, Chandler
Denny (Cinnamon), Jack Denny, Carson Denny (Katie); granddaughters Adeline and Reese
Denny; sister Susie Rumsey (Guy); and many cousins, nieces, and nephews.
In lieu of flowers, donations can be made to the Helen Denny, Chad Michael Rumsey &amp;
Guy H. Rumsey Scholarship. Send to the Bedford North Lawrence Scholarship Foundation, P.O.
Box 729, Bedford, IN 47421.