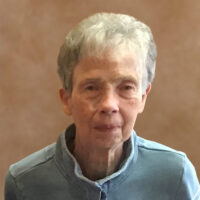 Marianne Sergent, 84, of Glenview, passed away peacefully surrounded by family on December 15. She was born to Victor and Mary Ruth Hemming in Chicago, where she developed an early passion for baseball tagging along with her dad to Cubs games and remained a lifelong fan and thankfully lived to see the Cubbies win the World Series. Marianne attended grammar school at St. Margaret Mary Church and went to St. Scholastica Academy before attending Marquette University and Mundelein College. She was a secretary at A.C. Nielsen Company in the late 1950s when a statistician named Edgar Sergent started work there, and it didn’t take long before they caught each other’s eyes and then married in 1960. Marianne left work when the first of her four children was born in 1961, and she became a devoted homemaker and mother to Jean, Mary, Jim and Bob. For decades, she kept the family’s brick Cape on Lincoln Street immaculately clean and organized, rode her bicycle to the grocery store to cook daily dinners for six, and kept her busy kids in line with regular homemade butterscotch cookies. Her youngest child, Bob, was barely out of college before her oldest, Jean, had her first baby; Marianne would spend the next several years helping care for grandchildren in the same home where her children grew up. Her final three years were spent at The Solana in Deer Park, where a caring and affectionate staff helped her cope with Alzheimer’s Disease. Marianne is survived by three of her children: Jean McClaughry (Gene); Jim (Jennifer) and Bob (Kelly) Sergent; and six grandchildren: Lauren and Will McClaughry; Henry and Chal Sergent; and Hailey and Patrick Sergent. Visitation will be on Wednesday, December 18, 5:00 until 8:00 pm at Ahlgrim Family Funeral Home, 415 S. Buesching Road, Lake Zurich IL 60047. A funeral mass will be held 10:00 am, Thursday, December 19, at St. Joseph Catholic Church, 206 E. Front Street, Harvard, IL 60033 with internment to follow at Ridgewood Memorial Park, Des Plaines, IL.