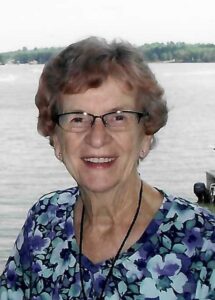 Nancy was born December 24, 1933 in Mankato, Minnesota, and passed away July 24, 2021 at St. Patrick’s Residence in Naperville, Illinois.

Nancy left Mankato, Minnesota after graduating high school to pursue a career with Prudential Insurance in Chicago, Illinois.  She met her husband Stuart on a blind date, and the two were married within six months.  They settled in Des Plaines, Illinois, where they raised their three children.  Nancy worked as an Executive Secretary until 1989, when they moved to Hawthorn Woods, where Nancy remained for the next thirty-two years. Stuart passed away in 2004.

Nancy was an avid bridge player with a competitive spirit.  She participated in several bridge groups over the years, and developed great friendships in those groups.

She and Stuart enjoyed traveling after Stuart retired, and they were lucky enough to travel to Ireland, Australia, New Zealand, England, Spain, Hawaii and the Caribbean.

Nancy was a proud grandmother, who enjoyed spending time with her children, grandchildren, and three great-grandchildren, Josiah and Brayden Chowdhury, and Grace Montpas. She will be missed dearly by her family and friends.

In lieu of flowers, memorials will be appreciated to The American Stroke Association.