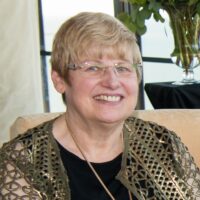 Visitation for Patricia K. Smietana (nee Kula), 73, of Arlington Heights, will be held on Monday, February 15, 2021 from 9:00 am until 10:00 am at Saint Edna Catholic Church, 2525 N. Arlington Heights Road, Arlington Heights.  A Funeral Mass will be said immediately following the visitation. The Interment will be private.

Patricia was born to Louis and Joan Kula, March 23, 1947.  She graduated from Loyola University in Chicago and entered the field of Human Resources.  She married the love of her life, James Smietana, in 1990.  Patricia was a loving sister and doting aunt to her many nieces and nephews.  Patricia held various volunteer roles in her church communities and had an abiding faith in God.  Patricia was a generous supporter of many charities, an avid reader, extensive traveler, and she created extraordinary glass jewelry in her spare time.

She is preceded in death by her husband, James Smietana; parents, Louis and Joan Kula; in-laws William and Josephine Smietana; and her sister, Lorraine Madaj.