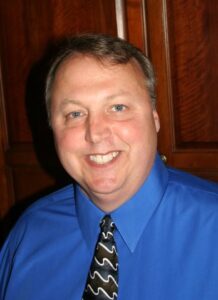 Richard George Kolbaba, 59, passed away peacefully after a sudden illness on June 21, 2021, in Tampa, Florida, surrounded by family. A Celebration of Life service for family and friends will take place at the Ahlgrim Family Funeral Home, 201 N. Northwest Highway, Palatine, IL, on Saturday, July 31, 2021 at 10:30a.m.

Born December 6, 1961, in Joliet, Illinois, Rick was a cherished son, brother, uncle, cousin and friend. Throughout his life, Rick made a lasting impression where ever he went. Gregarious, fun and thoughtful, Rick lived life to the fullest. When he wasn’t at work, you could find Rick cycling, hiking, walking in a state park admiring the scenery, or searching for a geocache. (The latter being among his favorite activities.)

He also enjoyed technology and was the family “go-to-guy” providing guidance and insight on the latest gadgets and trends.

A devoted uncle (affectionately dubbed Uncle Buck) Rick was known to text a silly joke, quirky fact, or funny video at all hours of the day or night. He had a wonderful sense of humor and a deep love for his family. Rick made sure family vacations included adventures, and was always up for trying something new. He was also a great sport, at one time allowing his nieces to “treat” him to a spa day that included face mask with cucumbers over his eyelids and pink toenail polish. Rick’s love was immeasurable.

Throughout his career, Rick managed various retail environments and succeeded at them all. He received prestigious awards for his work, but his greatest achievement was consistently earning respect and admiration from his supervisors as well as his employees. Rick connected easily with others and had a strong sense of integrity.

Rick was preceded in death by his brother, Michael John Kolbaba.

Donations in Rick’s name may be made to Florida State Parks Foundation by clicking here.