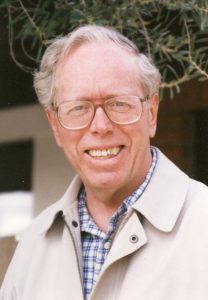 Robert Edward Eckels, 91, of Arlington Heights, Illinois, passed away peacefully on May 16, 2022 surrounded by family.

He was preceded in death by his parents Wilbur and Dorothy (Beardsmore) Eckels.

Bob was born on December 7, 1930 in East Saint Louis, Illinois.  He attended the University of Illinois in Urbana-Champaign where he received Bachelor’s and Master’s degrees in History.

Upon graduation, Bob joined the US Army serving from 1953-1955 during the Korean War while stationed in Schwabisch Hall in Germany.

After the war, he joined the Social Security Administration where he worked for 35 years.  At the SSA, Bob took on positions of increasing responsibility across the Midwest and Baltimore, Maryland before settling down in the Chicago suburb of Wheaton, Illinois, where Bob and Margaret raised their two sons.

Bob spent the last 31 years of his life in retirement.  He loved to travel, research his genealogy, build model boats and write short mystery stories.  He has over 60 published stories, many of which can be read on his website www.roberteckels.com and in his recently published book “Never Trust a Partner”.

He also loved spending time with his grandchildren Evan, Alyssa and Austin.  He and Margaret hosted countless sleepovers, baked Christmas cookies with them every year, and were frequent attendees of their childhood sporting events.

In lieu of flowers, donations may be made to the New Hope Scholarship Fund at the Moorings in Arlington Heights, Illinois or to a charity of your choosing.