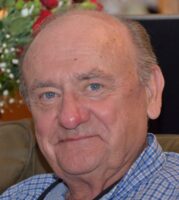 Bob was a Chicago native, and a die-hard Cubs fan. He attended Saint Patrick’s High School and Loyola University, receiving an MSIR after serving in the US Army as an Intelligence Officer in Viet Nam. He retired from Outboard Marine Corporation, where he served as Corporate Director of Human Resources.

Bob was known for his quick wit, intelligence, compassion, loyalty, and generosity. He was the devoted father of Elizabeth (Lisa) Earley (Michael Groble), Stephen Earley (Laurie) and David Earley (Susan Girardi). He leaves five awesome grandsons, Kieran and Brennan Groble; Patrick, Ethan and Matthew Earley, as well as his sister, Margaret Earley, OSSF, along with a wealth of nieces and nephews. He was the devoted husband and steadying force of Gail (Kymer) Earley, his wife of fifty-two years. They enjoyed traveling extensively, learning new things, and loved being back in Illinois, close to family. He will also be missed by his new love, a puppy named Kymeara.

Bob was preceded in death by his parents, Margaret and Robert A. Earley, and his sisters Joann (Bill) Geegan and Patricia (Tony) Cairo, and nephews Tim and Frank Geegan.

In lieu of flowers, donations Would be appreciated to your local A.S.P.C.A.