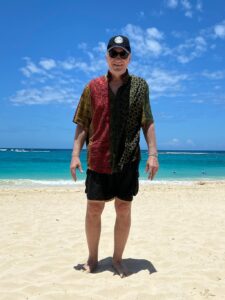 Visitation for Robert J. Meier, 67, of Kildeer, will be held Thursday, May 27, 2021 from 4:00 p.m. until the time of the Funeral Service at 6:00 p.m. at the Ahlgrim Family Funeral Home 415 S. Buesching Road, Lake Zurich. The family, and all guests, are encouraged to wear Hawaiian shirts and/or bright colors. The Interment will be private.

He is preceded in death by his parents Clayton and Patricia Meier.

Robert (Bob) grew up in Racine, Wisconsin, in a loving family of six brothers. He graduated from Loyola University Chicago and became a Certified Public Accountant. He settled in the western suburbs, raising his three children, Joe, Mike, and Allison to think independently, work hard, and have fun. He coached years of kids’ Little League teams, always focusing on sportsmanship and the joy of the game above all else. Bob was famous in the neighborhood for his elaborate decorations of the house for Halloween and Christmas, a display that peaked at three Santa Clauses (including one on the chimney and one that was actually just a dressed up Halloween ghoul). Bob, his five brothers, their parents, the sixteen cousins and later spouses and children spent many summer days at Blue Spring Lake in Wisconsin, where Bob taught countless kids, nieces, nephews, and friends how to water ski, kneeboard, skiboard, tube, and just about anything else that could be pulled behind a boat. He worked in a variety of jobs ranging from CPA to entrepreneur, but the jobs that gave him the most joy were working with his family. He married Silvia Suby in 2010, and they had recently rediscovered a passion for traveling and found a love of beaches and Hawaiian shirts. He leaves behind a loving family that has learned much about coaching, decorating, and working from him. He enjoyed time with his grandchildren both locally and spread across the country. He will be missed.

In lieu of flowers, donations are appreciated in Robert’s name to the Greater Chicago Food Depository (https://www.chicagosfoodbank.org/).