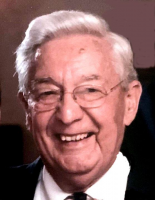 Visitation for Robert J. Parr, 96, of Oshkosh, Wisconsin, formerly of Hawthorn Woods, will be held on Wednesday, January 11, 2023, from 10:00a.m. until the time of the Funeral Mass at 12:00pm at St. Francis de Sales Catholic Church, 33 S. Buesching Road, Lake Zurich. The Interment will follow at Ascension Catholic Cemetery, 1920 Buckley Road, Libertyville, Ill. 60048.

He was born in Milwaukee, Wisc., on Aug. 26, 1926, and graduated from Wauwatosa High School in 1944. He worked at Mrs. Karl’s Bakeries after graduating and joined the U.S. Army Air Corps in February 1945. He served with the 3704th Army Air Forces Base Unit at Keesler Field in Biloxi, Miss. While at a USO dance, he met his wife, Hazel. They married in 1947 and had six children.

Robert and Hazel moved to Milwaukee after their wedding. He worked for Interstate Bakeries – the makers of Mrs. Karl’s and Butternut Bread – for 44 years. He began as a route salesman and retired in 1988 as a district sales manager living in Hawthorn Woods.

Outside of work and family, Robert was passionate about his work with the Knights of Columbus for 70 years. He was the Grand Knight for the Queen of Peace Council, Faithful Navigator for the Bishop Sheil Assembly 2330 and a Faithful Comptroller. He was active in the St. Francis de Sales parish in Lake Zurich, Ill., singing in the choir and serving on the Ministry of Care, bringing communion to the home bound, patients at Good Shepard Hospital in Barrington, Ill. and residents at Lexington Nursing in Lake Zurich.

In October 2014, Francis Cardinal George, OMI, and Bishop George Rassas awarded the Christifideles Award to Robert at Holy Name Cathedral in Chicago. The award is given to a layperson in each parish of the Archdiocese of Chicago that demonstrates faithfulness and dedication in ministry.

Donations can be made to the Knights of Columbus Queen of Peace Council #3954 Lake Zurich, 365 Surryse Rd STE 280, Lake Zurich, IL 60047 and Mount St. Joseph Lake Zurich, a non-profit Intermediate Care Facility for women with intellectual and developmental disabilities, at https://mtstjoseph.org/donations