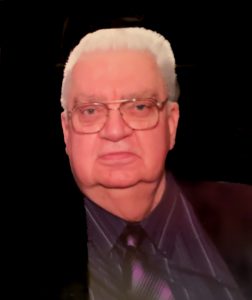 Visitation for Roger W. Olson, 82, of Lake Barrington, will be held from 3:00 pm to 8:00 pm on Thursday, September 1, 2022 at the Ahlgrim Family Funeral Home, 415 S. Buesching Road, Lake Zurich. Prayers will be said at the funeral home on Friday at 9:15 am proceeding to Transfiguration Church, 348 W. Mill Street in Wauconda for the Funeral Mass at 10:00 am.  The Interment will take place at St. Adalbert Cemetery in Niles.

He peacefully passed at his home on August 28, 2022. He was born in Iola, WI on January 31, 1940, and was raised in Chicago, IL.  He survived by his wife, Jeanette, his brother, Richard and numerous nieces, nephews and sister-in-laws.  Special thanks to nephew, Walter Lis, who was a dear friend and provided much help and comfort.

Roger married his childhood sweetheart, Jeanette Lis, on May 6, 1962, and enjoyed 60 years of wonderful marriage.  Roger served his country in the United States Army from 1963 – 1965, primarily in Augsburg Germany. He enjoyed spending time with his friends and family in both Illinois and Wisconsin and with his dear dog, Bella.  Roger will be greatly missed by many.