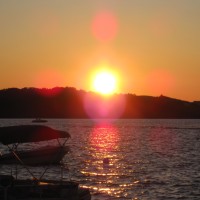 Tina was born December 5, 1929 in Palanzano, Italy, to the late Pia Malpeli (also known as Ercolina) and Pierino Pagani. She passed away at the age of 91 on February 25, 2021 in Hawthorn Woods, Illinois. Tina was the beloved wife of the late Elvino (Dino) Mazzetti whopassed away at age 94 in 2018.

She was preceded in death by her brother, Giancarlo, and grandson, Peter Carlberg.

Following her husband who came to the U.S. in 1953, Tina emigrated from Italy with her daughter in 1954 to settle in Chicago. She worked at the Edgewater Beach Hotel, the Palmer House, and later, the Frank Cuneo Memorial Hospital in Medical Records until her retirement. She loved cooking, gardening, and was an expert at crochet, knitting, and cross-stitch. She adored spending time with her children, grandchildren, and great-grandchildren as well as attending events at her local senior center and playing cards with her friends. She also spent many treasured summers at her home in Ceserano, Italy. Tina will be laid to rest alongside her husband, Dino, in the Grilli family mausoleum in Ceserano.