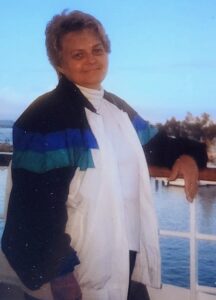 A Memorial Visitation for Shirley May (nee Wilde) Eichaker, 84, of Palatine, will be held Saturday, October 23, 2021 from 10:00 a.m. until the time of the Memorial Service at 12:00 p.m. at the Ahlgrim Family Funeral Home, 201 N. Northwest Highway, Palatine.  The Interment will follow at All Saints Cemetery in Des Plaines.

Shirley was born July 8, 1937 to Loretta and John; sibling to Buddy, June, Jack and Ruthie who all have preceded her in death.  Also preceded in death by her devoted and loving husband, Herbert John Junior.  Shirley was a nurturing mother to Mark who preceded his mother in death by little more than a month and Mathew who died shortly after birth. Shirley is survived by sons, Kurt and Dean.

She is also survived by a number of nieces and nephews to members of the Wilde, Eichaker and Natske families who remember her as a caring and wise Aunt always happy to cook up a stack of her Polish pancakes (crepes) or slave over her incredible Marinara.

Shirley and Herb were both residents of Chicago and married young and remained married until death took Herb in 1992.  They enjoyed many years of entertaining friends, traveling, and raising their boys and eventually enjoying and having time to spend with their much loved grandsons now partnered with families Scott and Kim and great grand-children, Colton, Hailey and Hunter and Matthew and Jorie and great-grandson Jackson.  Both grandsons were the children of Mark and his lovely wife, Carol.

Shirley was a dedicated employee and commissioner to Prospect Heights and Salt Creek Rural Park District.  She was a self-taught administrative  assistant and bookkeeper and she brought those talents to the committees, clubs and organizations where she became a member.  Some of which include, the Palatine Chapter of the Palos Heights Garden Club, the City of Palatine’s Beautification Committee, Palatine Historical Society and she was instrumental in the creation of Twin Lakes Recreational Park.

Shirley remained a steadfast and thoughtful friend not only to dear friends she knew from childhood and people she and Herb met over their many years together but also to a number of co-workers, committee members and neighbors until the effects of Alzheimer’s began to set in and slowly take her away from those who loved her.  In her final years she was no longer the quick wit, avid reader, relentless traveler, dear friend, grieving widow, loving grandmother and caring mother and aunt we knew her as.  She has been missed these many years but now she is finally at peace.

Squirrely, we have missed you and will continue to miss your sparkling eyes and mischievous grin.