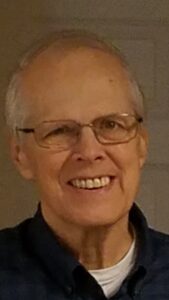 Visitation for Terry Alan Nelson, 78, of Palatine since 1986, will be held Monday, January 11, 2021, from 10:00 a.m. until the time of the Funeral Service at 1:00 p.m. at the Ahlgrim Family Funeral Home, 201 N. Northwest Highway, Palatine.  Interment will follow in Memory Gardens Cemetery, Arlington Heights.

Terry was a 1960 graduate of Taft High School where he excelled at running track.  He went on to run track at Wright Junior College.  He served in the Army and Air Force Reserves.  Terry earned a BA from the University of Illinois and an MA from Northern Illinois University.  Terry went on to have a fulfilling career as an IT Programmer in data security at Allstate.  Terry loved coaching youth baseball and soccer in the Buffalo Grove and Palatine communities.  He was an avid St. Louis Cardinals fan who enjoyed travelling and attending many Cardinal games with his family.  In his retirement years, he enjoyed spending time with family, coaching his grandchildren and exercising.

In lieu of flowers, memorials will be appreciated to the American Kidney Fund, 11921 Rockville Pike, Suite 300, Rockville, MD 20852, or visit www.kidneyfund.org.