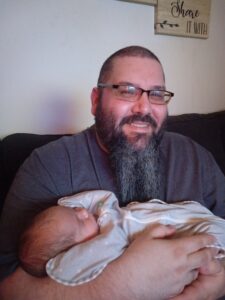 He passed away suddenly at home on Saturday October 30, 2021 in Bensenville, IL.

Tim was shy, a man of few words, but when he did open up his character and humor were second to none. Tim had the “tough guy” appearance, but those who knew him saw through the facade- as he was just a big teddy bear at heart.

Tim was talented in many ways, but really shined as a musician. Tim’s guitar playing was special- a talent many would spend a lifetime to achieve and still not match.

Tim and his fiancé, Liz, recently welcomed their son Gabriel to the world. It was clear Tim was determined to be the best father he could be, as Gabriel took center stage in his life. With his new bandmate in life, he could hardly contain his happiness.

“All alone as the memories still remain.”