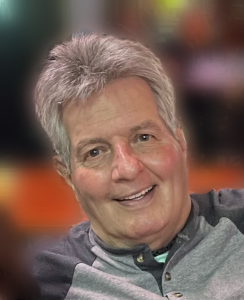 Visitation for Wally T. Biela, 74, of Rolling Meadows, will be held from 4:00 pm until the time of the Funeral Service at 6:00 pm on Friday, April 15, 2022, at the Ahlgrim Family Funeral Home, 201 N. Northwest Highway, Palatine.  A private family Interment will take place at a later date, at Abraham Lincoln National Cemetery, Elwood.

Wally grew up in Mount Prospect where he began many life-long friendships.  He was a proud Vietnam veteran who loved his country.  He worked for many years at Mount Prospect Post Office and later went on to become a skilled carpenter and remodeling contractor. He was a devoted family man who got much joy from spending time with his children and grandchildren. He loved baseball, especially the Cubbies. He had a passion for rock and roll and the blues and could often be found enjoying live music. He had a green thumb and was fascinated by Native American culture.  He made every holiday larger than life for his kids and grandkids through decorations and traditions. He was an expert griller and master gift giver. He loved to organize events and throw parties, often inviting more people than could fit in his house. He never missed the chance to sit by a campfire and enjoy “the lively art of conversation.” He was the first to buy a round at the bar, and he would most definitely insist that you had “one for the road.” His generosity and passion will live on through his family and friends. His close friends from childhood, the army, his jobs, and adulthood will remember the many good times they had together.

Wally was the devoted dad of Kelly (Mark) O’Kelly and Tyler (Laura) Biela; proud “Pops” of Cooper, Colin, Emersen, and Anna. He was the caring brother to Dianne (Mark) Smitter and Marilyn (Tom) Ungaro; and cherished uncle to several nieces and nephews.

He will be missed by his ex-wife and friend Carol Biela and brother-in-law Jamey (Nancy) Lill.

He is preceded in death by his parents Waldemar and Virginia Biela, his brother Joe Biela, and in-laws Joan and Jim Lill.

In lieu of flowers, donations may be made to Wounded Warrior Project.