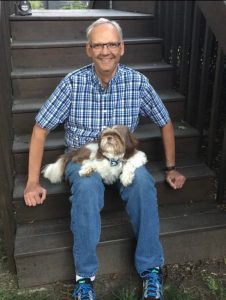 A Celebration of Life for William (Bill) Anthony Johnson will be held at a future date to be determined.

Bill was born on October 4, 1956, in Webster, South Dakota and died on March 17, 2022. He was surrounded by his beloved family and was able to say goodbye to his loved ones who couldn’t be there, using modern technology.

Bill graduated from the University of Iowa in 1978 with a degree in journalism. While at Iowa, he was the university editor of the Daily Iowan. He won several awards during that time, including, the Brewer key for journalistic excellence. His first job out of college was writing manuals for computer programs. He later completed his Masters in Business Administration at Duke University. He worked full time and went to classes in the evening, completing the program in two years. He had several different positions in the computer industry ending up working in Business Intelligence at Motorola.

Bill also loved science fiction and won a Hugo Award in 1998 for his novella, “We Will Drink a Fish Together”. His stories were published in “The Year’s Best Science Fiction” several times. His good friend Gay Haldeman helped guide him through the writing business.

Most of all, he loved his family. He was happiest being Baba to Elaine and Annaleia. He never missed a day telling us how much he loved us. He is sorely missed.

He had many trials related to a genetic disorder, Marfan Syndrome. He also told us that he didn’t want to have his life prolonged with machines. And he put this in many of his stories. He was also a very giving person and had checked the donate organs box on his driver’s license.

He was a very funny person and self-deprecating. He was very tall and would leave messages in the dust on the top of his friend’s refrigerators. Everywhere we went, people would ask him, “How tall are you?” Sometimes he’d say, “Don’t worry-you’ll get your full growth one day.”

In lieu of flowers, donations to The Marfan Foundation, https://marfan.org would be appreciated.