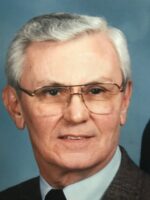 A Visitation for William Raymond “Bill” Bazant, age 88, will be held on Sunday, May 5, 2019 from noon until the time of the Funeral Service, 3:30 p.m. at the Ahlgrim Family Funeral Home, 201 N. Northwest Hwy. Palatine. The Reverend Karl Fay will officiate. The Interment will be private at Windridge Memorial Park in Cary, IL.

He is preceded in death by his parents, his son, Billy, and his grandsons, Andrew and Alexander.

Bill played baseball, football and basketball for North Central College, where he graduated in 1952, then proudly served in the U.S. Army, a decorated veteran of the Korean War.

He was a well-respected leader in the Office Supplies industry, starting his career in sales at 3M and rising to Director, Merchandising at Boise Cascade/Office Max from which he retired in 1992.

Bill was a member of Prince of Peace Lutheran Church in Palatine.